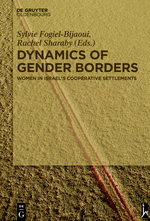 Resting on the multifaceted and multicultural voices of women – secular and religious, old-timers and newcomers, at the center or on the periphery of their communities – it brings into sharper focus rarely raised issues related to gender borders and to the private and public spheres.
Beyond the specific society they treat, these essays contribute to our understanding of the social mechanisms that (re)produce gender inequality in modernity, in its socialist, capitalist, or postindustrial versions.
They also provide additional evidence for the limits of any attempt to achieve gender equality by focusing on the transformation of women, without challenging hegemonic masculinities